END_OF_DOCUMENT_TOKEN_TO_BE_REPLACED

An important character detail in the film The Silence of the Lambs (1991) is the journey of Clarice Starling, played by Jodie Foster, from a rural working-class background to sophisticated city life as an FBI agent.

Take for example this monologue by Dr Hannibal Lecter, played by Anthony Hopkins, during his first encounter with Starling (from 4:15 in the clip; transcript below):

END_OF_DOCUMENT_TOKEN_TO_BE_REPLACED

Movie accents: the good, the bad, and the mystifying

Dialect coach and voice actor Erik Singer released a video this week that analyses 32 film actors’ accents, pointing out what they do well and what not so well. There’s a fair range of performances and genres, with some notoriously bad accents and a few surprises.

It’s a highly entertaining video that lasts a little over a quarter of an hour.

END_OF_DOCUMENT_TOKEN_TO_BE_REPLACED

The whole race of unreal people

Time is against me these days, but I want to share a few passages of linguistic interest from Lorna Sage’s remarkable memoir Bad Blood. Sage, who was a professor of English and a literary critic, grew up in a village called Hanmer in north Wales. This first excerpt, which considers the local dialect, follows a note on Thomas Hardy:

Hanmer wasn’t on his [Hardy’s] patch, of course, but you could picture the Maelor district as a mini-Wessex, less English, less fertile, lacking a writer to describe it. The local dialect did make a lot of the syllable ‘Ur’ that he singles out in Tess to stand for the ancient burr you can hear in country voices. In Hanmer grammar ‘Ur’ or ‘’Er’ was the all-purpose pronoun used for men, women, children, cattle, tractors. It implied a kind of levelling, as though all were objects, and you could use it for a tree or a stone, too. In my memory it’s always associated with negatives – ‘dunna’, ‘conna’, ‘wunna’. You kick a gate that’s warped half off its hinge: ‘’Er wunna open,’ you say without surprise. Everything had its own sullen, passive power of resistance.

END_OF_DOCUMENT_TOKEN_TO_BE_REPLACED

Actors’ use of gibberish

Harriet Walter, in her book Other People’s Shoes: Thoughts on Acting, describes an exercise in actors’ training which is designed to ‘break the language barrier and stretch one’s physical invention’.

Named Gibberish, it is: 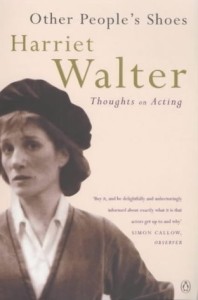 the practice of substituting what was in the script with our own gobbledegook. The purpose was to release us from the constrictions of another person’s words, to bypass ‘meaning’ and send us straight to a creative source we might not know we had. With Gibberish we could burst our civilized seams and see what else was there. Who were we when released from the conditioning shackles of our hereditary patterns of speech?

At LAMDA [London Academy Of Music & Dramatic Art] we invented fabulous hybrid languages (mostly based on soundtracks from Swedish, Russian or Japanese movies) which broke the mould of our familiar accents and tones. We rediscovered the infantile pleasure in making noises and letting them reverberate to the ends of our toes.