This week I took Alan Furst’s Red Gold (HarperCollins, 1999) off the shelf and am very glad I did. Set in German-occupied France in the early 1940s, it’s an absorbing, rambling spy story full of atmosphere, wry humour, lean characterisation, and suspense.

The protagonist, Casson, is a former film producer scraping by in Paris, hiding from the Gestapo. He becomes a reluctant go-between for various entities in the resistance, and in the following passage has just been told the identity of a contact he hopes to make:

Casson knew him, had sat across from him at a dinner party back in the old days. After that, a handshake two or three times at some grande affaire. Casson hated him. Short and wide, preposterously fat, with thick glasses and tight, curly hair. He floated on waves of amour propre – boundless conceit, in measures rare even in France. He described himself as an ethnologist, no, there was more to it than that, it was better than that. Socio-ethnologist? Psycho-ethnologist? Anyhow, a hyphen. Now he remembered – gods, something about gods. He’d written a book about them.

END_OF_DOCUMENT_TOKEN_TO_BE_REPLACED

Book spine poem: After the fire 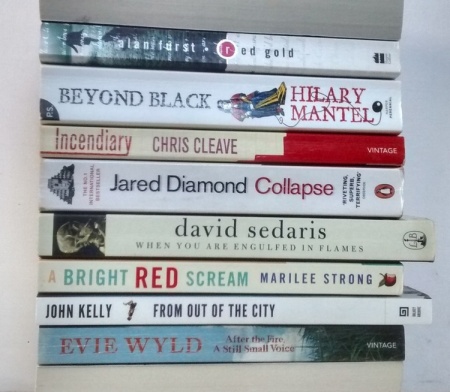