END_OF_DOCUMENT_TOKEN_TO_BE_REPLACED

Talk with your mouth full: the literary game of mouth-filled speech

In 2011 a reader wrote to linguist David Crystal with an interesting question. Having tried recently to brush their teeth and talk at the same time, they wondered how such ‘approximations of real words’ might factor into language – and whether authors had ever exploited this form of speech ‘for inventive literary purposes’.

In his post on what he calls ‘mouth-filled speech’, Crystal looked at phonetics, politeness, etiquette, risks, and frequency (‘really rather common’), but found scant examples in literature or language corpora. My intention here is to share a few from books I’ve read in the meantime – mostly novels but one non-fiction.

We may talk with all sorts of things in our mouth, such as food, pens, pins, fingers (our own or other people’s), tongues (just other people’s), dentist’s instruments, gum shields, gags, and of course toothbrushes. Crystal lists various other possibilities.

Transcribed, the utterance may be transparent or heavily obscured, depending on the writer’s strategy and skill in treating the phenomenon. Context can help readers infer the muddled words, or the author may convey it through repetition. When there’s no narrative reason to have characters speak unclearly, it can be a nod to realism or verisimilitude or perhaps serve as a linguistic game or challenge.

END_OF_DOCUMENT_TOKEN_TO_BE_REPLACED 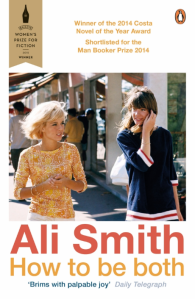 END_OF_DOCUMENT_TOKEN_TO_BE_REPLACED

A scene in Ali Smith’s wonderful novel How to Be Both (Hamish Hamilton, 2014) depicts a curious but common experience: people with no shared language having a conversation. Given enough time and repeated encounters, such parties may, of necessity, create a pidgin. But for one-off exchanges it’s a different story.

Like the comic Saga, whose use of untranslated Esperanto I wrote about recently, How to Be Both switches to Italian and lets the reader fend for themself. But even if, like the story’s main characters, you don’t know the language, some words and names will be familiar or guessable.

The protagonist, George, a teenage girl, is visiting a gallery in northern Italy with her young brother, Henry, and their mother:

END_OF_DOCUMENT_TOKEN_TO_BE_REPLACED

This post is a mixum-gatherum of bits from books I’ve read over the last while. First up is an arresting passage from ‘Vertigo’ by Joanna Walsh, in her short story collection of the same name:

At the turn of the road, willing the world to continue a little space, there is a man, a woman, and a child. They are not tourists: there are few here. From the outside, the man is greater than the woman, who is greater than the child. The child is brighter than the woman, who is brighter than the man. Of their insides we know nothing, because we cannot understand the words that turn those insides out. I grasp at words in this language with other languages I know, languages other than the one I mostly speak, as though one foreignness could solve another.

I love the idea of using language as a tool not to communicate directly but to unlock another language, like an inoculation.

END_OF_DOCUMENT_TOKEN_TO_BE_REPLACED

Every so often I make a poem by stacking books on top of one another so their titles line up felicitously. I call them book spine poems, or bookmashes for short. Here’s a new one.

Voices in stone
breaking the rock:
the accidental grammar,
the loom of language,
the awakening of intelligence,
the mind’s eye reborn –
Renegade presence,
gifts of unknown things.

Some of these are recent additions to the bookshelf; a few are old favourites. There’s a strong bias towards non-fiction here, with Ali Smith’s the only novel. In 2013 I found a close ratio of fiction to non-fiction in my bookmashes, but I’ll have to review the figures, maybe when I’ve done 40 or 50 (we’re at 37 now).