END_OF_DOCUMENT_TOKEN_TO_BE_REPLACED

Presently ambiguous, and till vs. until

In my language column at Macmillan Dictionary, I’ve been writing about whether presently is ambiguous, as some authorities warn, and about the uses of and differences between till, until, and their abbreviations.

Ambiguity is presently unlikely shows my conclusion in the title, but the detail is worth examining. I’m usually reluctant to warn against using certain words or phrases, and so it is with presently in its primary sense of ‘currently’:

Bill Walsh, in Lapsing into a Comma, recommends avoiding it as a synonym for currently. So does R.L. Trask, in Mind the Gap. Harry Shaw, in his Dictionary of Problem Words and Expressions, calls the usage ‘inaccurate’, while Garner’s Modern English Usage finds it ‘poor’ because it causes ambiguity. . . .

The difference between till and until is something I’ve been asked about a few times over the years. In TIL about till and until, I sort out these synonyms and related forms, describing how they differ, how they don’t, where you can use them, and which ones to avoid. There’s also a bit of history:

People often assume that till is simply an abbreviation of until, but in fact till is a few centuries older. It shows up in the runic inscription on the ancient Ruthwell Cross in Scotland, where its original sense was the same as ‘to’.

There is an abbreviation of until: ’til. Some critics reject it, because we already have till. They may even call it incorrect. ’Till is still more disparaged, because the apostrophe is superfluous, and although this form was used by George Washington, of all people, I can’t recommend it. Apostrophe-less til is occasionally used, but spelling-wise it falls between the two stools of till and ’til.

END_OF_DOCUMENT_TOKEN_TO_BE_REPLACED

The more finicky a distinction, the more fanatically people take sides over it. The Oxford comma (aka serial comma, series comma, etc.) is a case in point. Some people – often copy editors or writers – adopt it as a tribal badge and commit to it so completely that it becomes part of their identity. They become true believers.

Being a true believer means adhering to the faith: swearing, hand on stylebook, that the Oxford comma is the best option, end of story. ‘It eliminates ambiguity,’ they assert without qualification. Many claim to use it ‘religiously’, or they convey their devotion to it in analogous secular terms.

Either way, this is dogma, and like all dogma it masks a more complicated (and more interesting) truth.

END_OF_DOCUMENT_TOKEN_TO_BE_REPLACED 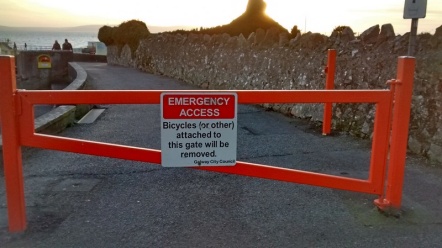 END_OF_DOCUMENT_TOKEN_TO_BE_REPLACED

Only just to realise the ambiguity

I got an email recently from file-hosting service Dropbox, telling me about the apps they have for different devices. This is the first of two sentences in the main body of the email; see how it sounds to you before reading on:

Have you ever wanted to show off some photos, or pull up a doc from work, just to realize you left them on your computer at home?