Annals of animals which get ‘who’

In a local newspaper some time ago I read about ‘dormice . . . who nest in shrubs and hedgerows’. The grammar of this phrase struck me enough to write a brief post on the different kinds of antecedent for which we use the relative pronouns who, that, and which.

When referring to animals we usually use that or which, reserving who for people, or entities that comprise people. But who may also be used for animate entities with personality or the implication thereof, and this includes non-human animals – even dormice, I was pleased to see.

As the table below shows, who is especially likely to be used with pets, companion animals, or domesticated or very familiar animals. If the creature has been personalized with a name or by establishing its sex, there’s a good chance it will warrant who.

END_OF_DOCUMENT_TOKEN_TO_BE_REPLACED

Fear of feet and relative ambiguity

In Lucy Ellmann’s sharp comic novel Varying Degrees of Hopelessness there is a minor but interesting ambiguity:

Later, she formed an alliance with a man much younger than herself, a man with small feet that didn’t scare her, a man who earned his living by entering supermarket competitions and the occasional raffle.

But then why use a man who in the next clause? If the variation is meaningful, and not motivated by whimsy or euphony, etc., we could reasonably assume the fear refers to the feet. But I wouldn’t bet on it.

In a post on animals and pronouns, I summarised as follows: that can refer to things or people, which refers to things but not normally people, and who refers to people (and sometimes animals, or entities that are humanlike or have an implication of personality).

The unsung value of singular ‘themself’

I’ve written before about the reflexive pronoun themself, showing its history in English and potential to fill a semantic gap in the language. Once a normal, unremarkable word, themself became less preferred over time, and its use today is low: Oxford Dictionaries says it’s “not widely accepted in standard English”, while Macmillan Dictionary says “most people consider this use incorrect”. Many dictionaries omit it.

This is a pity, but these are not permanent prescriptions – they’re observations about the usage’s current state of acceptability. And they are subject to change, because language is, because we are. 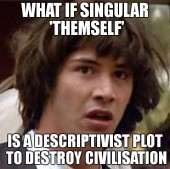 Themself is no mere quirky substitute for the more familiar pronoun themselves: it enables us to make subtle anaphoric distinctions. As my earlier post shows, there are situations where the use of themselves in place of themself would be misleading. By avoiding and stigmatising themself we miss a useful linguistic trick.

END_OF_DOCUMENT_TOKEN_TO_BE_REPLACED

In Barry Blaustein’s wrestling documentary Beyond the Mat, then-WWF supremo Vince McMahon has just given Darren Drozdov his new character name, Puke, and is explaining how he’ll be introduced to the audience. You might want to skip the quotation if you’re eating:

So, after you’ve regurgitated on one of your opponents, or on the referee itself, then of course the ring announcer would, y’know, then say your name.

The phrase the referee itself is grammatically interesting. Wrestling referees are adult people, and when it or itself is used to refer to a person, it’s usually a very young person or a part of a person – not an adult of unknown or unspecified gender.

But none of the alternative pronouns is perfect in that position. The referee himself is the most obvious (the job is male-dominated), but it is sexist; himself or herself (or similar) would be pedantic; themselves strikes me as awkward here, though I like singular they; and themself is rare, and does not occur to most speakers.

So the choice of itself, made on the spur of the moment, lets McMahon avoid constructions that are problematic for various reasons – but in doing so objectifies the referee in an unusual way. (Compare with the use of whom to refer to houses, which I heard in a documentary on The Truman Show.)

Omitting the intensive pronoun entirely would be the simplest solution, since it’s not essential here. But in casual speech we don’t normally get a chance to weigh up options like this. I’d be interested to hear your thoughts.

The kinds of things relative pronouns refer to in modern English can be divided roughly as follows:

that – things and people

which – things, but not normally people

who – normally people, not things, sometimes animals or human-like entities (“animate but not human”, says Robert Burchfield; “having an implication of personality”, says the OED)

When it comes to relative pronouns, animals often aren’t accorded the same grammatical status as people. We’re more likely to say The crow that was here than The crow who was here, though of course it varies with the speaker, type of animal, and context. 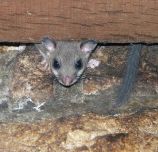 So I was struck by a line in last week’s Galway Advertiser reporting the recent entry of the dormouse to Ireland’s ecology (we already have the wood mouse and house mouse):

Dormice are woodland animals, who nest in shrubs and hedgerows, particularly those containing hazel (as their name suggests) or brambles.

I haven’t looked into it, but I’d bet that of references to dormice in equivalent contexts, at least 95% would use that or which rather than who.

Not everyone supports this extended use of who, but it is defensible; the Merriam-Webster Dictionary of English Usage quotes lines by John Updike (“the hamster who had died”) and Stanley Kauffman (“Tonto is his cat, whom he walks on a leash”) showing its literary acceptability.

Dormice of the world, welcome to Ireland – and to the Grammatical Who Club.

Edit: More on this topic in my post Annals of animals which get ‘who’.

I guess that’s why they call ‘thats’ the ‘whose’

Reading a review of the 1983 fantasy film Hundra (a feminist knockoff of Conan the Barbarian), I came across a pretty unusual word, albeit one that almost looks perfectly normal. Film historian Paul Mavis, at DVD Talk, says the film’s creators:

set about to make a spoofy fantasy adventure thats focus would be on a gorgeous, blonde, man-hating super-warrior who was subservient to no one.

Few readers would pause over that thats: its meaning is clear in context, and it draws little attention to itself, its ungrammaticality thoroughly overshadowed by the line’s sensational imagery. Who’d be distracted by the subtle asymmetry of English’s relative pronoun system when there are man-hating super-warriors striding about?

END_OF_DOCUMENT_TOKEN_TO_BE_REPLACED

Singular they, you, and a ‘senseless way of speaking’

It’s enough to drive anyone out of their senses – G. B. Shaw

Every fool can do as they’re bid – Jonathan Swift

I like singular they, and I use it often. Most English speakers do, without even thinking about it. There may be times when alternatives are preferable, but singular they/their/them generally works very well, and the grammatical objections to it are specious. Other objections – based on aesthetics, feelings, or dubious authority – are weaker still.