The process of removing ‘process’ from your writing

Wait, let me try that again.

Writing is in large part rewriting and editing. After getting some text down, you begin rearranging and snipping. This is…

In my work as a copy-editor, especially with academic and business texts, I see superfluous process a lot. It’s a popular crutch word, established among writers’ unconscious bad habits.

END_OF_DOCUMENT_TOKEN_TO_BE_REPLACED

Gender-neutral language in the workplace

I wrote an article on the importance of gender-neutral language in the workplace for UK job-board company Totaljobs. The article considers work-language in a cultural context and the harmful effects of gender-biased usage. Here’s an excerpt:

Studies have shown that when words like man are used generically to refer to people, readers tend to picture men only, not a balance of men and women – let alone women only. Phrases like man’s origin and modern man overlook women’s contributions to civilisation; man-made and man as a verb downplay women’s labour. This kind of language is not harmless: it helps subordinate women in social and political relations. . . .

Language is not neutral or used in a vacuum: it incorporates personal assumptions, social norms, and cultural ideologies. This is why it’s important to consider language critically as a social and political tool and to watch for biases in usage. Language reflects the world it’s used in, but it’s also active in maintaining or redesigning that world. It can be a tool of discrimination or one of empowerment.

You can go here for the rest. Totaljobs commissioned the article as part of research they did on gendered language in job ads. They analysed over 75,000 of their own ads and summarised the results here.

Editing texts at work – reports, circulars, strategic plans and the like – is a vital step in preparing them to communicate their content as well as possible. Hiring a professional editor is generally a good idea, but if the text is for in-house use only, that may be overkill.

In this situation, editing is assigned to a company employee who is not a professional editor but has a good command of English prose. The question is, how do you do it? Where do you start? What do you prioritise?

My friends at Emphasis Training asked me to break down the job of editing texts at work. My article is now up on the Emphasis website: The smart way to edit your colleagues’ documents. It offers 23 bite-sized tips. Here are two:

Review similar items together, for example all the tables and captions, or all the headings and subheadings. Clumping these tasks means you’re looking out for the same things at once, which reduces the cognitive load and also the chances of overlooking something.

Office reports are often written by more than one person or over a period of time. This can lead to disjointed prose: lines may be added or changed without due regard for context, causing breaks in flow. If your work environment permits it, read the text aloud. This will help you notice any awkward phrasing or non sequiturs.

You can read the rest here.

I have dictionaries on the brain – more than usual – having just read and reviewed Kory Stamper’s book Word by Word. So it’s a good time to share a couple of posts I wrote for the blog at Macmillan Dictionary, which, incidentally, underwent a makeover recently.

The first post has a self-explanatory title: What does it mean when a word is not in the dictionary?

No English dictionary includes every single word – not even the Oxford English Dictionary. . . . Nor does the OED – or any other dictionary – include every word from the many sublanguages, dialects, and specialist lingos: this would be an impossible task. Macmillan Dictionary, by contrast, includes historical words only if they’re still in common use. And because it’s primarily a learner’s dictionary, it forgoes obsolete usages altogether. Macmillan’s focus on contemporary language means that one of its strengths is how quickly it keeps up with the changes and new additions to English vocabulary.

The example I focus on is snowflake, in its non-weather-related sense, because it’s common enough that people are encountering it regularly and looking it up, but it’s also new enough that it’s not yet listed in most dictionaries.

A world of English at Macmillan Dictionary looks at an ongoing series from Macmillan called Real World English. This is a set of videos and blog posts about dialectal variation in English vocabulary and pragmatics, especially between UK and US English in a work context.

One of the motifs of the Real World English series is that these varieties of English have different standards and conventions. None of them are necessarily more correct than any others, but what’s normal and obvious in one dialect may be obscure or ambiguous in another. Being aware of how various Englishes diverge in usage can help us improve our understanding of, and communication with, people who speak another variety. This is an increasingly important skill in work and social situations, now that telecommunications and internet technology have made the world smaller. We often communicate with people on several different continents every day, especially if we use social media.

The post goes on to discuss the range of dialects featured in the series or in other resources on the website, including Brazilian English, Indian English, Philippine English, and so on. You can also read older posts at my Macmillan Dictionary Blog archive.

Proofreading is a recurring theme on Sentence first, with regular posts looking at particular items of usage and examples of where proofing fell short. But although it’s part of my day job, I haven’t written often about the act itself.

I was recently approached by Maggie Biroscak at Jimdo for some thoughts on the subject. Maggie’s article has now been published, and offers great tips on proofreading your own text, while acknowledging the limitations of this approach. It features quotes from Dawn McIlvain Stahl, online editor of Copyediting.com, and me.

One of Maggie’s tips is to check names repeatedly:

A word won’t be offended if you misspell it. Not always true with a person. So be courteous and focus your attention on names. Unfamiliar names are easy to mess up, because your brain doesn’t notice if they’re spelled incorrectly (approximately 14-16% of corrections in major newspapers are misspelled names). Common names with uncommon spellings (Dwyane Wade, anyone?) can also cause major headaches for proofreaders.

I can testify to this. Much of what I edit and proofread is academic writing – scholarly reports, essays and theses – and if you’d expect academics to be more rigorous about people’s names, you would be wrong. Most unedited theses get the name of a referenced author incorrect, and they commonly misspell several.

Maggie quotes me advising that if you’re uncertain about any aspect of punctuation, you should read up on it. Many writers routinely use semicolons for colons, or hyphens for dashes, and their commas and apostrophes can be haphazard. If you want to be a writer, you can’t punctuate based on guesswork or assumption – you have to learn it.

Inconsistency, whether in style, vocabulary, or formatting, is another significant issue and one that proofreaders and editors fix constantly. As Dawn McIlvain Stahl says, inconsistencies in a text can suggest “that you’re not very careful or professional”. Here are a few additional tips, which may apply especially to beginner proofreaders:

I would stress that proofreading your own text, while fine as far as it goes, is no substitute for having it done professionally by an experienced third party. They’ll spot things you didn’t, and they’ll know things you don’t. Questions 3 and 5 on my editing website’s FAQ address this, and explain briefly why it matters.

Maggie Biroscak puts it well: “Sloppy writing makes people wonder what else you’re messing up on.”

Proofreader hard at work, using ‘The Isolator’ to minimise distraction. From: http://50watts.com/Fantastic-Plangent 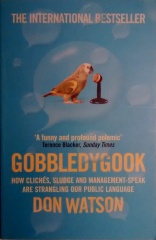 Advice on the formal use of ‘advise’

After suggesting alternatives and tracing the history of advise in its relevant guises (Shakespeare shows up a couple of times), I make some general points about tone in business writing and official language – specifically the tendency to be excessively formal:

It’s a frequent error of judgment to assume that plain language is unfit for business, that these transactions deserve more inflated expression. It may be a habit picked up by imitation — please advise, after all, is common in official and semi-official writing. But whatever the motivation, the results can sound starchy and pompous…

Writers with these habits may be unaware of the tonal problems in their prose, or they may be unsure how to fix them. This is where an editor comes in handy. (I specialise in plain English, making officialese and academese more accessible to general readers.)

Note: The article was published in April but for the first three months was available only to Visual Thesaurus subscribers, so I postponed mentioning it here until it was freely available. You can now read it here, and, if you like, advise your thoughts in a comment below.