Here are a few items of linguistic interest from In the Shadow of Man, Jane Goodall’s account of her pioneering study of chimpanzee behaviour in Tanzania in the 1960s. I featured In the Shadow of Man in a bookmash a couple of years ago, but that was before I had read it. 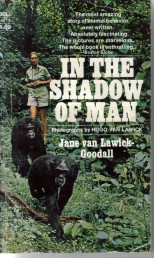 To describe chimpanzees’ practice of fishing for termites (with a twig, vine, grass stem, straw, or finger), Goodall uses various conventional phrases, such as fishing for termites and termite-fishing, which seems the default. But she also verbs termite itself, just as we’ve long done with fish:

As the termite season wore on there could be no doubt that Flo’s older offspring were kidnaping Flint with the deliberate intent of getting their mother to stop, at least for the time being, her endless termiting. […]

Fifi, on the other hand, was a keen termite fisher, and when Flint, wanting to play with his sister, jumped onto her and scattered the insects from her grass stem, she was obviously irritated. Over and over she pushed him away roughly. Fifi still played with Flint frequently herself when she was not termiting . . .