Strong Language: The return of the ***king

It’s over a year since I blogged about Strong Language. Time to recap.

For the uninitiated, Strong Language is a group blog about swearing – the linguistics and culture of taboo language – set up by James Harbeck and me in 2014. It boasts a great team of writers comprising linguists, lexicographers, historians, editors, and other word adepts.

There are swears in this post, so bail out now if they bother you.

END_OF_DOCUMENT_TOKEN_TO_BE_REPLACED

Back in December I introduced Strong Language, a new group blog about the use, culture, and linguistics of profanity cooked up by James Harbeck and me. While some of you are now regular readers, others may be unaware of it or glad of a reminder or an update, so this post can address that. The language below may offend, so caveat lector.

Strong Language started well and this year has gone from strength to sweary strength. We’ve redesigned its appearance, partnered with Slate’s Lexicon Valley, and added more writers to the team of regular contributors. The @stronglang Twitter account ties in with the blog but does its own stuff too, such as film stills and swearwords of the day.

I’ve written ten posts for Strong Language and have as many more in various stages of completion or planning. Published posts look at filthy old songs, Irish English shite, multilingual swearing, and Rob Chirico’s book Damn!, among other things. I also compile ‘Sweary links’ – like the ‘Link love’ posts here on Sentence first, but swearing-related. 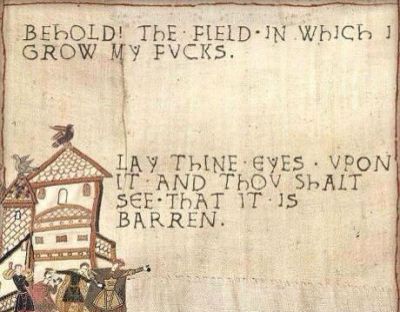 END_OF_DOCUMENT_TOKEN_TO_BE_REPLACED

Show, don’t tell goes the writer’s refrain. It can apply to cursing, too, but doesn’t tend to in contemporary prose. Swearwords pepper modern novels, not least in genres like detective fiction where they lend colour and authenticity to hard-boiled dialogue. But there are times when a writer can say more by not saying them.

Take Deirdre Madden’s novel Molly Fox’s Birthday. (Or better yet, read it.) Madden has a gift for imaginative description but knows when to apply the subtler force of discretion. Here the narrator, a playwright, is chatting by phone to her friend Molly Fox, a stage actor with what we have learned is a remarkable voice, ‘clear and sweet’ and at times ‘infused with a slight ache, a breaking quality that makes it uniquely beautiful’.

Molly has just received birthday wishes from a mutual friend:

‘How did he know that today was my birthday? Did you tell him?’

She swore when I said this, a sudden, crude outburst. It was all the more shocking because Molly almost never swears. There was the incongruity of hearing such a thing uttered in that particular voice, and I realised that she was as capable of drawing forth all the ugly power an oath might contain as she could the beauty and tenderness of other words. ‘I never heard such nonsense in my life. I’m only thirty-eight.’

I would not have remembered this scene so clearly had Madden simply written whatever swearword Molly used. By denying us that ordinary certainty she invites us to fill the blank – or blankety-blank – ourselves, and we become more engaged with the text. The omission is a seed crystal. This is Fiction 101, I know, but still: how often in a book do you see a swearword lingered on yet withheld?

It’s also an appropriate strategy because of the characters involved. Through their friendship Molly has earned the storyteller’s tact; making her ‘crude outburst’ explicit would allow a moment of weakness to materialise, for the world at large, into something unbecoming and uncharacteristic. By conscientiously keeping it vague, reminding us instead of Molly’s extraordinary voice, the narrator does her friend a kindness and the scene is the better for it.

I rarely post here twice in one day, but I have some news to share: Strong Language is a new group blog about swearing set up by sesquiotic linguist James Harbeck and me. This is how it started.

As James puts it, the blog:

gives a place for professional language geeks to talk about things they can’t talk about in more polite contexts. It’s a sweary blog about swearing.

At the bottom of the new blog you’ll see some familiar names among the contributors. More will be signing up, and we’re very open to ideas for new material. The associated Twitter account is @stronglang.

"We begin to swear before we can talk." —Mark Twain, Following the Equator (1897)

Some of you may find the idea unappealing, and will not wish to read further. I won’t hold it against you.

It’s early days, and we’re still figuring out the details, but there are several posts up already on a range of topics, including the phonology of cusswords, whether shit is a contronym, and one from me today on great moments of swearing in the horror film The Thing.

If swearing gives you lalochezia or interests you linguistically, culturally or ineffably, then bookmark, subscribe and follow at will, and spread the word if the notion takes you.

My first Strong Language post is featured on the Paris Review blog:

Great moments in swearing: an utterance in John Carpenter’s The Thing helped define our sense of a treasured obscenity.

There’s a new linguablog that’s definitely worth your time if you’re not put off by vulgarities. And if you revel in vulgarities, well, you’re in luck. . . . James and Stan have enlisted a great lineup of contributors (I’m happy to be one of them).

Eugene Volokh gives Strong Language his nod of approval at the Washington Post.

Strong Language just got picked up by MetaFilter.

Language Hat is also happy about it.

Katy Waldman at Slate‘s Lexicon Valley blog welcomes the “cheerful temple to the vulgar and profane” that is Strong Language.

Jazmine Hughes at The Hairpin praises Strong Language‘s “scholarly, robust, cool-as-shit deep dive into when and why we swear, where our curses come from, and what, exactly, they mean”.

Although the blog’s authors are serious about language, they don’t take themselves too seriously, so the posts are as hilarious as they are informative. Plus you’ll pick up some language that would make Malcolm Tucker proud.

The curses and adjectives of Luis Buñuel

This week I read My Last Breath, the autobiography of one of my favourite filmmakers, Luis Buñuel. Mischievous, opinionated, and full of eye-opening anecdotes from his long and frankly surreal life, it also has a couple of passages on matters linguistic that may be of general interest.

First, on the importance of choosing a good name, in this case for artistic works:

In my search for titles, I’ve always tried to follow the old surrealist trick of finding a totally unexpected word or group of words which opens up a new perspective on a painting or book. This strategy is obvious in titles like Un Chien andalou, L’Age d’or, and even The Exterminating Angel. While we were working on this screenplay [The Discreet Charm of the Bourgeoisie], however, we never once thought about the word “bourgeoisie.” On the last day at the Parador in Toledo, the day de Gaulle died, we were desperate; I came up with A bas Lénin, ou la Vierge à l’écurie (Down with Lenin, or The Virgin in the Manger). Finally, someone suggested Le Charme de la bourgeoisie; but Carrière [Jean-Claude, screenwriter] pointed out that we needed an adjective, so after sifting through what seemed like thousands of them, we finally stumbled upon “discreet.” Suddenly the film took on a different shape altogether, even a different point of view. It was truly a marvelous discovery.

The next passage concerns an incident during the Spanish Civil War. Buñuel has left Madrid for Geneva on the instruction of the Republican minister for foreign affairs, but he is warned en route that his identification papers will not get him past the border. Sure enough, a panel of “three somber-faced anarchists” halt his passage: You can’t cross here, they tell him. Buñuel has other ideas:

END_OF_DOCUMENT_TOKEN_TO_BE_REPLACED

He cursed the curse that would not come

Language is a recurring theme in The Reawakening, Primo Levi’s account of his life in the months immediately after liberation from Auschwitz. In particular, the book describes many encounters with people of different tongues and how he and they find ways to communicate based on second, third, or no languages in common.

Other features of language emerge in the book’s frequently wonderful characterisations. A description of the foul-mouthed “Moor from Verona”, for instance, begins with physical detail:

There were about twenty others in my dormitory, including Leonardo and Cesare; but the most outstanding personality, of more than human stature, was the oldest among them, the Moor from Verona. . . . He was over seventy, and showed all his years; he was a great gnarled old man with huge bones like a dinosaur, tall and upright on his haunches, still as strong as a horse, although age and fatigue had deprived his bony joints of their suppleness. His bald cranium, nobly convex, was encircled at its base with a crown of white hair; but his lean, wrinkled face was of a jaundice-like colour, while his eyes, beneath enormous brows like ferocious dogs lurking at the back of a den, flashed yellow and bloodshot.

And from there builds a picture of a man at once enigmatic and larger than life yet who is accommodated comfortably in the expansive pages of Levi’s memoir.

In the Moor’s chest, skeletal yet powerful, a gigantic but indeterminate anger raged ceaselessly; a senseless anger against everybody and everything, against the Russians and the Germans, against Italy and the Italians, against God and mankind, against himself and us, against day when it was day, and against night when it was night, against his destiny and all destinies, against his trade, even though it was a trade that ran in his blood. He was a bricklayer; for fifty years, in Italy, America, France, then again in Italy, and finally in Germany, he had laid bricks, and every brick had been cemented with curses. He cursed continuously, but not mechanically; he cursed with method and care, acrimoniously, pausing to find the right word, frequently correcting himself and losing his temper when unable to find the word he wanted; then he cursed the curse that would not come.

While it’s admirable to take such care over swearing practices, it may be better to just unleash any expletive at all than to compound the frustration in a vain search for the perfect curse. But to each their own.

Here’s a fun passage in Dashiell Hammett’s ‘The Gutting of Couffignal’, a great story that opens The Big Knockover and Other Stories (whose colourful crooks’ names I listed recently). Skip the first paragraph if you want to avoid spoilers.

‘There’s your choice, Flippo,’ I summed up for him. ‘All I can give you is freedom from San Quentin. The princess can give you a fat cut of the profits in a busted caper, with a good chance to get yourself hanged.’

The girl, remembering her advantage over me, went at him hot and heavy in Italian, a language in which I know only four words. Two are them are profane and the other two obscene. I said all four.

Profanity is when something is considered insulting to a religion, its god(s), or people’s beliefs in them. Obscenity involves offense to taste or common decency, something vulgar enough to be taboo in a given context (often relating to sex or bodily functions). There are legal nuances to both terms, but I won’t get into that here.

Two profane and two obscene words, all presumably common swears, or common in the early 20th century. I can guess what they might be, but maybe Hammett didn’t have four particular words in mind. There are Italian speakers in my family; I’ll run it by them. For research.