As far as I’m concerned, whom is a word that was invented to make everyone sound like a butler. (Calvin Trillin)

Who am I writing for? (William Zinsser, On Writing Well)

Twitter has a feature called Who to follow that suggests other users you might be interested in. I haven’t paid it much attention yet, but I’m interested in the fact that the phrase is censured by people who think it should be Whom to follow. There’s even a Chrome extension that “corrects” it. 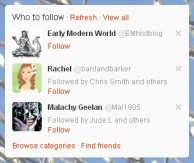 Did I say even? I should have saved that for the Grand Order of the Whomic Empire, which solicits “moral support for those people who work tirelessly to bring whom back into everyday circulation”. I fear their quest is not entirely tongue-in-cheek.

Anyway: Who to follow. Let’s see what its critics say.

Business Insider thinks it’s “bad English”. GalleyCat calls it “one of the most viewed and easily overlooked grammar mistakes on the Internet”, adding that it’s “reassuring to watch a major social network struggle” with grammatical rules. Jay Rosen, who teaches journalism at NYU, believes it’s a “grammatical error”: