Fear and loathing of the passive voice

A great many people are unsure what the passive voice is, and what (if anything) is wrong with it. That wouldn’t be such a problem, except that a lot of those people misidentify and misrepresent the passive voice from positions of authority – whether they’re authors of writing manuals or journalists in need of a rhetorical scapegoat.

Whenever someone complains about the passive voice, see if they're misidentifying or oversimplifying it. There's a very good chance of both.

This is why you’ll often find writers deploring the passive while using it naturally in their own prose, blithely unaware of the double standard. For example, The Elements of Style says, ‘Use the active voice.’ But the first paragraph of E.B. White’s introduction to the book has five transitive verbs, four of which are (perfectly unobjectionable) passives. 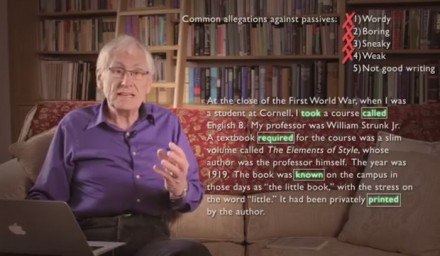 ‘Fear and Loathing of the English Passive’ is the name of a recent paper (PDF; HTML) by linguist Geoffrey Pullum on the passive voice. He has followed it with a series of six short videos on the topic (whence the image above). I’ve embedded them all below, for convenience.