The Spaceage Portal of Sentence Discovery

I received an email lately about an admirable new website, The Spaceage Portal of Sentence Discovery, that stores and classifies examples of “interesting sentence- and paragraph-level patterns, including figures of speech, grammatical-syntactic structures, and other rhetorical devices”.

It was created by David Clark, an English teacher who sees the educational value of collecting and systematically arranging sentences that exemplify these literary-linguistic structures and devices. (The project was also motivated by “unadulterated nerdiness”, something language enthusiasts will identify with.)

The portal offers a great range of categories, both familiar and obscure. Under hyperbole, for example, I found entertaining examples from Angela Carter, Ambrose Bierce, Shakespeare, Flann O’Brien, and others. Imagery, smell has a solitary example from Annie Proulx, so that tag would benefit from readers’ submissions.

To get a feel for how it works, click around and see what happens. If you’re into language and literature, you’re likely to find it fun and edifying. David would love to hear comments and suggestions, and he invites readers to use and share the site and contribute examples to its database. As he says: the bigger it becomes, the more valuable it can be.

Earlier this year, ELT Journal kindly sent me a copy of Evolving English: One Language, Many Voices, a new book by the eminent linguist and author David Crystal.

Published by the British Library, Evolving English is an illustrated history of the language, and it is a fine and fascinating work. My review has now been published and is available online. Here’s an excerpt: 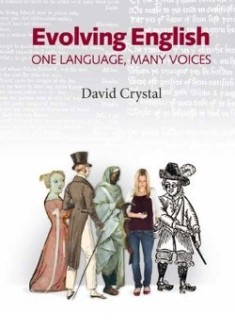 The relationship between language and culture is a theme that runs throughout Evolving English. As its subtitle One Language, Many Voices indicates, the emphasis is on the great variety of English. . . . Everyone who speaks or writes does so in a unique idiolect. Our language overlaps with the shapes it assumes in the particular circles and cultures we move in, but English would not have become a global lingua franca were it not flexible enough to accommodate so much regional variation. (I find Irish English a particular joy, but again I could be biased!)

Crystal’s book celebrates this diversity and the infinite ways it gives life to language. . . . [It] offers not just a snapshot of English as we know it but a panoply of snapshots throughout history, some familiar, some obscure. It presents them in the context of their times and cultures and shows skilfully and entertainingly how they bring to bear on the language we revel in today.

You can read the full review at ELT Journal. At about 2000 words it is quite detailed – but it will, I hope, appeal to anyone with an interest in language and the history and evolution of English.

A note on the publisher: ELT Journal, originally named English Language Teaching, has been in continual publication since 1946 and gave its name to the field of study often called ELT. The website has a large archive of articles, but – my review excepted – you’ll need to subscribe or pay to read more than an extract or abstract.