Language links ahoy. If you’re looking to pass an hour or a few with some linguistic reading and audiovisual material, see what takes your fancy from the selection below (there are lots more after the fold). A couple of them are even about you know what.

What counts as a slur, and why?

The Iron Curtain lives on as an isogloss.

Irish English as the new EU working language [my annotations]

Emoji are to digital messages what gestures are to speech.

When translation means editing the machines.

END_OF_DOCUMENT_TOKEN_TO_BE_REPLACED

Language is always changing, and on a macro level some of the most radical changes have resulted from technology. Writing is the prime example. Millennia after its development, telephony reshaped our communication; mere decades later, computers arrived, became networked, and here I am, typing something for you to read on your PC or phone, however many miles away.

The internet’s effects on our use of language are still being unpacked. We are in the midst of a dizzying surge in interconnectivity, and it can be hard to step back and understand just what is happening to language in the early 21st century. Why are full stops often omitted now? What exactly are emoji doing? Why do people lol if they’re not laughing? With memes, can you even? 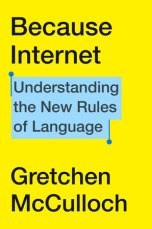 Because Internet: Understanding the New Rules of Language is a new book by linguist Gretchen McCulloch that sets out to demystify some of the strange shifts going on in language right now. It provides a friendly yet substantial snapshot of linguistic trends and phenomena online, and it explains with clarity and ebullience what underpins them – socially, psychologically, technologically, linguistically.

‘When future historians look back on this era,’ McCulloch writes,

they’ll find our changes just as fascinating as we now find innovative words from Shakespeare or Latin or Norman French. So let’s adopt the perspective of these future historians now, and explore the revolutionary period in linguistic history that we’re living through from a place of excitement and curiosity.