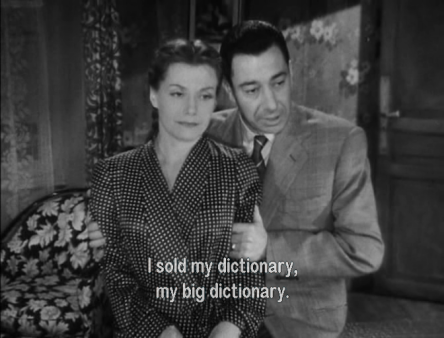 Had anyone else sold their dictionary – their big dictionary – I might have felt sorry for them. But if you’ve seen the classic suspense film Les Diaboliques (1955), you won’t feel any pity for its cruel male figure. The actors shown are Véra Clouzot and Paul Meurisse. Véra’s husband, Henri-Georges Clouzot, directed the film.

END_OF_DOCUMENT_TOKEN_TO_BE_REPLACED

I’ve been stop-start-reading the revised edition of Kim Newman’s Nightmare Movies, a gift from my brother; it’s an encyclopaedic and thoroughly enjoyable account of Horror on Screen Since the 1960s, as the subtitle has it.

One chapter traces the development of the haunted house genre in film and literature, and upon reaching the landmark release of Rosemary’s Baby it offers an eye-catching usage:

There is no ghost, except the angry shade of Beethoven invoked by the unseen pianist’s stumbling attempts to get through Für Elise, but the Bramford [Rosemary’s apartment building] does have a Past. Ira Levin refined the parallel plot, a device that has been used in most subsequent haunted house films. While the protagonist is being overwhelmed by the supernatural forces clinging to his/her new home, he/she does a little detective work and pieces the place’s evil past together from newspaper morgues, friendly occultist know-alls, and ageing eyewitnesses.

This use of his/her . . . he/she I found a bit halting and self-conscious. It took me out of the text, and not simply because I attend closely to pronoun use. Instead of conveying the author’s intent discreetly, it’s orthographically conspicuous enough to be distracting. Especially because it’s repeated: one instance might sneak by, but two is a pattern that draws unwanted attention.

I’m going to rework the line in question a few times, so I’ll give each version a number. Here’s the original again:

1. While the protagonist is being overwhelmed by the supernatural forces clinging to his/her new home, he/she does a little detective work…

He/she and his/her are more equitable than generic he and his (which I see depressingly often), but they still give men precedence of position. S/he avoids this, but only by fragmenting she and leaving readers with something weird-looking and effectively unpronounceable. Simple reversals (she/he) are occasionally used, or the slash may be replaced by a conjunction: she or he, he or she.

But there’s another problem. All of these options implicitly adopt a gender binary that excludes people who do not identify as either he or she (see my post on Mx). Writing manuals and style guides commonly note that he/she is awkward or clunky, particularly when repeated, but they seldom acknowledge its politics. One of the reasons I support singular they is that it circumvents this restrictive paradigm.

The older I get the more unwieldy & exclusionary 'he or she' seems when we have singular 'they' available. It's natural, unfussy, inclusive.

In Newman’s text, however, simply replacing his/her and he/she with singular their and they could mislead readers into thinking that the new home is the (plural) supernatural forces’, not the (singular) protagonist’s:

END_OF_DOCUMENT_TOKEN_TO_BE_REPLACED

The semantic scope of ‘Martian’

When the horror comedy film Slither came out in 2006, I thought it far too derivative, with major plot points and big reveals rehashed from ideas I’d seen before – in David Cronenberg’s Shivers and Rabid, Brian Yuzna’s Society, and the entire first half of George Romero’s career.

But there were things I liked about it too, so I felt I owed it another look. Second time around I appreciated its queasy charms and lively sense of fun much more, and as an unexpected bonus it contains a brief semantic dispute.

This takes place in a car as our heroes escape from unspeakable weirdness and try to figure out what’s going on. Slight spoilers follow in the subtitled images below. Some dialogue is repeated here to accommodate editing cuts and show who’s speaking. If strong language bothers you, flee now while you can.

END_OF_DOCUMENT_TOKEN_TO_BE_REPLACED

Use ‘said’ and ‘wrote’, the editor highlighted

Fiction writers are rightly advised to use said in dialogue and avoid redundancies or conspicuous synonyms: ‘You must,’ he insisted. ‘The hell I will!’ she shouted loudly. This sort of thing is likely to annoy readers and distract them from the story. It’s one of Elmore Leonard’s 10 rules of writing:

Never use a verb other than “said” to carry dialogue. The line of dialogue belongs to the character; the verb is the writer sticking his nose in. But “said” is far less intrusive than “grumbled”, “gasped”, “cautioned”, “lied”. I once noticed Mary McCarthy ending a line of dialogue with “she asseverated” and had to stop reading and go to the dictionary.

Yet writers continue to riddle their stories with showy or gratuitous synonyms. It can give the impression that they’re trying too hard to enliven their text, without knowing the right and wrong ways to translate their passion for the material into something readers will appreciate, not wince at. If you’re going to thesaurify said, you’ll need a damn good reason.

Cartoon by Edward Steed for the New Yorker

Horror writer Ramsey Campbell had a good reason in his short story ‘Next Time You’ll Know Me’ (1988), which plays around with the ownership of ideas and the challenge of being original. Its narrator deliberately overwrites his account, studiously avoiding said in almost every report of speech in favour of overblown alternatives:

END_OF_DOCUMENT_TOKEN_TO_BE_REPLACED

This was on my shelf a while before I spotted the intruder:

I love a good ghost storty, and since it’s Henry James I don’t expect these will be very gorty. The book was published by Wordsworth Editions in 2001: not their crowning glorty.

Imagine their fright, though, when they finally spotted it. I’ll be glad if there’s anything in the book as scary as that.

Incubus: a film in Esperanto with William Shatner

On a walk in Galway once I met a Polish couple poring over a map. We were going the same way, and fell into step. They were in town for an Esperanto conference, and when the man – an Esperanto playwright – learned I had an interest in languages, he eagerly gave me a crash course in its grammar as we manoeuvred the uneven paths and busy streets.

It was a fun experience, but it remains the only proper exposure I’ve had to spoken Esperanto. More recently I encountered the language again, not in the flesh but in the form of a film: I wrote a post about films of linguistic interest, and the comments soon filled up with tips; Edward Banatt suggested Incubus.

END_OF_DOCUMENT_TOKEN_TO_BE_REPLACED

Last Sunday night I was reading a story called Oke of Okehurst by Vernon Lee in an old Penguin edition of The Supernatural Omnibus, Volume 1: Hauntings and Horror, a terrific collection of occult stories edited and introduced by the enigmatic Montague Summers. (Many of its stories are available online here.)

Lee’s tale is terrifically told, extravagantly descriptive yet precisely controlled, and with a mounting sense of inescapable doom. There is a wonderful passage wherein the narrator, a painter, describes the unconventional beauty of the central character, Mrs Alice Oke:

I don’t believe, you know, that even the greatest painter can show what is the real beauty of a very beautiful woman in the ordinary sense: Titian’s and Tintoretto’s women must have been miles handsomer than they have made them. Something – and that the very essence – always escapes, perhaps because real beauty is as much a thing in time – a thing like music, a succession, a series – as in space. Mind you, I am speaking of a woman beautiful in the conventional sense. Imagine, then, how much more so in the case of a woman like Alice Oke; and if the pencil and brush, imitating each line and tint, can’t succeed, how is it possible to give even the vaguest notion with mere wretched words – words possessing only a wretched abstract meaning, an impotent conventional association? To make a long story short, Mrs. Oke of Okehurst was, in my opinion, to the highest degree exquisite and strange, – an exotic creature, whose charm you can no more describe than you could bring home the perfume of some newly discovered tropical flower by comparing it with the scent of a cabbage-rose or a lily.

Further along is a line that remained with me for a less romantic reason: I wasn’t sure whether it was a mistake or an unusual usage:

It was Mrs Oke, her eyes prenaturally bright, and her whole face lit up with a bold, perverse smile.

Here is a photo:

It seemed to me that the word prenaturally ought to have been preternaturally. The word prenaturally was unknown to me, and seemed a strange formation, while preternaturally would make sense in the context. In other words it appeared to be a publishing error. (I have seen worse.) However, I was prepared to delay judgement until I could confirm the matter either way. For one thing, the story was written in the late 19th century, and many a word has changed its form since then; for another thing, I was tucked up in bed.

The next day I searched several dictionaries for prenatural(ly), all in vain, while various Google searches returned only a small number of obscure or anomalous usages. It didn’t take long to find several online copies of Oke of Okehurst, and sure enough they all contained the phrase “her eyes preternaturally bright”. Maybe I ought to have searched for that phrase in the first place, but I did want to give Penguin Books the benefit of the doubt. Anyway, in a book full of mysteries it was a pleasure to find a bonus one to solve by myself, even if it was less lurid and more mundane than the others.