END_OF_DOCUMENT_TOKEN_TO_BE_REPLACED

The mamas & the papas in babies’ babbling

Babbling is a key stage in language acquisition. We can see where it fits into the overall progression in the following “very rough” table taken from Jean Aitchison’s The Articulate Mammal: An Introduction to Psycholinguistics:

After the cooing or gurgling phase from which it develops, babbling has a distinctly speech-like quality because it features “sounds that are chopped up rhythmically by oral articulations into syllable-like sequences”, as Mark Liberman describes it.

The sounds most associated with babbling are mama, papa, dada, nana and slight variations thereon — as for example in the well-known video of twin babies repeating dada (and dadadadada, etc.) to each other.

This is true of a great many languages from different language families and parts of the world. The remarkable correspondence can be seen in a list included in Larry Trask’s “Where do mama/papa words come from?”, about which more below:

END_OF_DOCUMENT_TOKEN_TO_BE_REPLACED

A new documentary about language, Fry’s Planet Word, began on BBC2 yesterday with an episode about linguistic origins and evolution. Its host, Stephen Fry, looked into evolutionary-linguistic concerns such as how languages are related, how they are acquired (the Wug test was demonstrated), the significance of the FOXP2 gene, and why other primates haven’t developed language.

One sequence looked at sign languages: how they work and how they differ from speech and from each other. Fry watched a drama group sign (and reinterpret) Little Red Riding Hood, then asked them what signs are used for famous people like Obama, Hitler, and Madonna, noting how expressive and humorous a form it can be. The theatrical theme continued with Fry participating in a Klingon performance of Hamlet, hurting his throat on its harsh phonology. 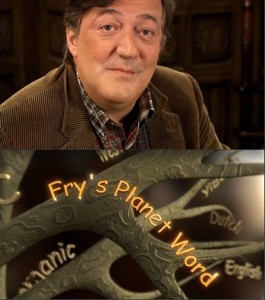 The episode’s title, Babel, struck its final symbolic note at a UN session where Fry met a translator who sang the praises of linguistic variety. You could say “Well, she would”, but her sincere delight in the beauty of languages was obvious, and was music to Fry’s ears. Mine too.

Each of the areas touched upon would have benefited from a dedicated show, or even a series, rather than the few minutes allotted before we were whisked off to the next location on the whistle-stop tour. But language is a dauntingly broad and complex subject, and the show seems designed as an introductory guide; on that basis it did fine.

The programme featured interviews with the likes of Wolfgang Klein (see par. 1, second link), Jean Berko Gleason, Stephen Pinker, and Michael Tomasello, who proposed that language emerged in functional tandem with group coordination, perhaps in hunting. Their contributions were regrettably too brief to convey much more than generalities.

All in all, though, it was an enjoyable programme, and I plan to keep watching it if I can. As you might expect, Fry stressed the importance of creativity and pleasure in our linguistic gift, but he didn’t overdo it. His geniality and enthusiasm will attract and retain the interest of viewers who might not otherwise wonder about some of the marvels and mysteries of language.

Here he is talking about language and Fry’s Planet Word:

On an unrelated note, Sentence first has been nominated for a grammar blog contest at Grammar.net. Since it depends wholly on votes, it is in effect a contest of popularity and self-promotion.

Though I’m honoured to be included, I do not aspire to compete. But I won’t object if you want to do me (or someone else) the honour of a vote, and you might enjoy browsing the list of language blogs.

Some of you will have seen these videos already: Sam and Ren, fraternal twins, engaged in a conversation of very animated babbling. Regardless of your tolerance for cute-baby videos, the chat is great fun and quite fascinating to watch – especially the second video, which has been watched many millions of times in just a few weeks:

The boys’ mother is a twin herself, and she shares her family’s adventures here. (After the footage went viral, it wasn’t long before parodies popped up, but I’ve yet to see one worth linking to.) Some of the media coverage suggests the possibility that the twins have a “secret language”, but this is improbable. As Mark Liberman writes in a comment at Language Log,

It seems unlikely that material as phonetically unmodulated as this recording actually contains any communicated lexical material (as opposed to acting out conversational interaction without any propositional content). The “private languages” of siblings are not like this, for an obvious reason: it’s hard to develop an effective human spoken language with only one syllable. . . . It’s possible that variations in timing and pitch are carrying some quasi-lexical information here . . . but I rather doubt it.

Sam and Ren’s discussion might be minimal in its selection of syllables, but the twins show great range of tone, timing, and gesture. They deploy all sorts of conversational skills, and the fact that they are twins means each has a peer at a similar level of development with whom he can practise.

Many of their vocalisations take the form of reduplicated or reduplicative babbling (e.g., da-da-da), but there’s far more communication taking place than just repetition of simple utterances. Hope Dickinson, of the Speech-Language Pathology Program at Children’s Hospital Boston, says the twins are

demonstrating great mimicking of multiple aspects of conversation. . . . One thing they are using wonderfully is turn taking, as in first one “talks” and then pauses and the other responds. . . . There is fantastic rise and fall to their pitch and tones. Sentences or exclamations end loudly and emphatically, and there is also some questioning (rising) intonation. They are using gestures to supplement their talking, much like adults do. Their body distance is even very appropriate for most Americans; not too close, but not too far either.

Already, these twins have a greater command of turn-taking than some adults I’ve encountered, to say nothing of their infectious enthusiasm for, and delight in, simple conversation. Or not so simple. As the great computer intelligence Golem remarked, in Stanisław Lem’s Imaginary Magnitude, “Babble can be highly complex!”

The blog As a Linguist… has two excellent posts on the subject: “This just in…babies make noises!” and “I guess you had to be there“. Here’s an excerpt from the former:

We can’t say if the twins at that stage of development really can understand that the behavior they are practicing is language which communicates a very specific meaning. It may very well be that they are simply mimicking the entire behavior – intonation pattern, gestures, and turn-taking – and gaining an understanding that these actions and sounds produce certain results or behaviors when these large, lumbering adult creatures in the house perform them, and maybe they should learn to do the same.