END_OF_DOCUMENT_TOKEN_TO_BE_REPLACED

The linguistics of colour names

The news website Vox has produced some good videos on linguistic topics, which can be found amidst their many other clips. Its latest one looks at the vexed question of colour names and categories in different languages, and in 6½ minutes it offers a decent summary:

END_OF_DOCUMENT_TOKEN_TO_BE_REPLACED

Linguist, professor, and author John McWhorter has featured on Sentence first a few times before, in posts about texting, creoles, dialects, linguistic complexity, and book spine poems. He has written many books and countless articles about language, and has been hosting the excellent Lexicon Valley podcast for the last while.

In the video below, McWhorter talks about the ideas in his recent book The Language Hoax, the hoax being the Sapir–Whorf hypothesis, aka linguistic determinism or relativity, depending on how strongly it’s believed to apply.* This is the appealing but mostly unfounded notion that our language shapes the world we experience. There’s a helpful summary of it here, and further discussion in this book review.

The subtitle of McWhorter’s talk, ‘Why the world looks the same in any language’, outlines his position. But he acknowledges there is wiggle room for weak versions of the hypothesis, whereby our perceptions can vary slightly because of our different native languages. It’s a fun and interesting talk, given at the Santa Fe Institute in New Mexico in 2016. It’s around 50 minutes long, and there’s a lively Q&A to finish.

END_OF_DOCUMENT_TOKEN_TO_BE_REPLACED

Despite their Whorfian tang I enjoyed these reflections on language learning from Anaïs Nin. They’re from A Woman Speaks: The Lectures, Seminars and Interviews of Anaïs Nin, edited by Evelyn J. Hinz (1975):

Language to me is like the discovery of a new world, really a new state of consciousness. A new word to me was a new sensation. Reading the dictionary, anything at all, can add not only to your knowledge but also to your perceptions.

Do new languages bestow new states of consciousness? The idea that bilingual (and multilingual) people inhabit different personalities in different languages has much anecdotal evidence to support it – many bilinguals report feeling like different people when they speak different tongues.

Researchers who have studied the phenomenon are equivocal about its implications – it probably has far less to do with grammar than with the environments and cultures associated with the languages.

END_OF_DOCUMENT_TOKEN_TO_BE_REPLACED

Since I have neologisms on the brain, I got to thinking of one coined by Robert Anton Wilson (in his book The New Inquisition, as far as I know): sombunall, meaning “some but not all”. Wilson intended it as “semantic hygiene”, a neo-Whorfian corrective to dangerous generalisation, or a sort of epistemological buffer.

The word hasn’t caught on widely. Google hits aren’t much of a metric, but sombunall’s count of <7.5k (when last I looked) shows its relative obscurity; on the OneLook dictionary aggregator only Urban Dictionary features it (nothing in the unabridged OED or Merriam-Webster). Maybe because some but not all isn’t so unwieldy in the first place, and plain old some does solid work albeit without explicitly emphasising the not-all bit.

I included sombunall in an early language-links post, but never adopted it habitually myself. Because of its limited use, the word remains strongly associated with Wilson, as do its relative mosbunall (“most but not all”) and the Discordian in-joke fnord, among others. This RAW fan site, for instance, is subtitled “Sombunall things Robert Anton Wilson”.

Reading Susan Sontag’s Against Interpretation, I came across one occasion when it would have been very convenient to have sombunall available in general circulation. From the short essay on Simone Weil:

With his commitment to systematic uncertainty, or perhaps more accurately anti-certainty, Robert Anton Wilson would, I think, have enjoyed those lines. I have sombunall faith in this assumption, of course.

Episode 2 of Fry’s Planet Word (BBC) focuses on dialects and sociolinguistic identity. It kicks off in Yorkshire, where poet Ian McMillan demonstrates stereotypical aspects of various local accents. Fry is inspired to offer his own verbal tour of the UK’s accent map, playing a weatherman to help precipitate the “microclimates” analogy.

There’s an unexpected detour into Whorfianism. After pondering our dialects’ effect on how people perceive us (Geordie, once scorned, is now adored), the show looks at languages’ effect on how we perceive the world. Lera Boroditsky, who champions linguistic relativity, tells Fry that people speaking Russian or English espouse more collectivist or individualistic ideas, respectively.

This has dinner-party Wow value, especially when it’s the only side of the story we’re told, and it seems inevitable we’ll soon hear the no-word-for-X meme. Sure enough Fry asks, rhetorically, “If you don’t have a word for evil, does it vanish?” The answer, which was not supplied, is a resounding No. (Assuming the existence of evil for the sake of the question.)

Next up is language death, something Fry rightly laments. We venture to Connemara, County Galway, where he famously had a cameo in the Irish TV soap opera Ros na Rún. He drinks Guinness and hears stories in traditional pubs, asks schoolchildren about learning Irish (they admit to texting in English), and shares hopes and trivia about the Irish tongue. Fry has spoken on this subject before. 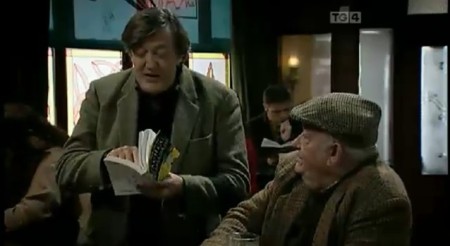 In the Basque country, Fry meets a woman who says language, like food, can absorb external influences. He suggests that language and cuisine might be closely entwined because recipes were once passed on by word of mouth. It’s an interesting idea, but without researching it I have no idea if it’s based on fact or theory or hearsay or whimsy; and this, I think, is the show’s fault.

When I wrote about the first episode, Babel, I said Fry’s popularity and likeability would draw an audience who might not have a particular interest in language. But because he is not a specialist, he misses opportunities to ask better questions, and we are left with too much fluff. I kept getting the impression that the most important thing in any encounter was that everyone enjoy themselves and get along.

In France, Fry meets one of the 40 immortals of the Académie française, which dictates on “proper” French. It’s a curiously awkward meeting, and Fry, left outside the door while the Académie holds a meeting, decides the system is “very strange and very French”. Lightening the mood, he hears from a hip-hop singer in Marseilles how subcultural and ethnic minority slang is slipping into common spoken French in small but satisfying ways.

Similar mixing is happening in Hebrew, which died as a spoken language but was revived through political will and collective identity. Fry visits Ghil’ad Zuckermann, who offers an amusing metaphor of Hebrew as a Phoenix, a cuckoo, and a magpie. At a garage, they discuss the problem of what to call things like puncture and carburettor in a language that was frozen for so long. Some ancient terms are modernised, some words are borrowed from elsewhere. 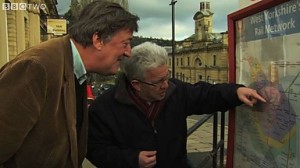 Every language, so long as it lives and is not totally isolated, is a melting pot, and the show finishes in a cauldron of partisan wit: a football ground, where Fry watches Norwich City and he bonds with his chosen tribe. The obvious point is quickly made, and there is no time for analysis or examples of the curses and chants of the terrace.

Planet Word is fond of bonding, and of cultural quirks and scenic jaunts, but so far it suffers from a dearth of information and structure, and a surfeit of Stephen Fry himself (whom I like). Experts are interviewed, but given too little time. That said, it is an enjoyable programme with broad appeal; your mileage will probably vary principally according to your feelings about Fry and your foreknowledge of linguistics.

Next week’s episode is about swearing. That should be fun.

Update: Language Log has posted a critical review of this episode that looks in more detail at its shortcomings.

Book review: Through the Language Glass

Whether and how our languages shape our thoughts, perceptions and worldviews is a perennially vexed subject. (For starters, what do we mean by shape and thoughts?) Known as linguistic relativity or the Whorfian or Sapir-Whorf hypothesis, the nature and extent of this influence have proved difficult to establish. Traditionally, some philosophers made grandiose claims about it, but the currency of such claims plummeted in the 20th century.

Linguist Guy Deutscher, in a NYT Magazine article titled ‘Does Your Language Shape How You Think?’ says that with ‘Science and Linguistics‘ (PDF), Benjamin Whorf ‘seduced a whole generation into believing that our mother tongue restricts what we are able to think’. I don’t think Whorf deserves so much responsibility, or blame, for whole-generational seduction,* but here’s a pertinent excerpt from his influential essay:

Formulation of ideas is not an independent process, strictly rational in the old sense, but is part of a particular grammar, and differs, from slightly to greatly, between different grammars. We dissect nature along lines laid down by our native languages. The categories and types that we isolate from the world of phenomena we do not find there because they stare every observer in the face; on the contrary, the world is presented in a kaleidoscopic flux of impressions which has to be organized by our minds — and this means largely by the linguistic systems in our minds.

Despite linguistic relativity’s fall from academic favour, it persists – thrives, even – in the popular imagination. In his new book Through the Language Glass: Why the World Looks Different in Other Languages, Deutscher looks at how valid it really is and what conclusions may be drawn about it. Sifting through a weight of data and theories, he describes several ways in which a weak form of linguistic relativity seems to obtain – colour perception, gender, and spatial orientation – and makes the case that language can influence our thoughts and thought patterns not radically, but more significantly than is sometimes acknowledged.