One of the phrases most guaranteed to annoy usage traditionalists and purists is beg the question meaning raise the question or evade the question. While raise the question (or invite, elicit, prompt, etc.) is by far the most common meaning, it differs from the initial philosophical one. So it makes a good case study for language change and attitudes to it.

First, the traditional use: beg the question was originally a logical fallacy also known as petitio principii. It’s kin to circular reasoning in which a person assumes the conclusion in their premise. That is, the truth of their argument is based on an assumption that hasn’t been proved, and needs to be.

Same-sex marriage should be forbidden, because marriage must be between a man and a woman.

Democracy is the best system of government because of the wisdom of the crowd.

END_OF_DOCUMENT_TOKEN_TO_BE_REPLACED

Notes on language from Steve Martin

Yes, that Steve Martin. I just read Born Standing Up: A Comic’s Life, his engaging account of his early years as a stand-up comedian and gag writer for TV, and I’d like to share a few short passages that relate to language.

On one of his endless trips around America as an aspiring freelance comic, Martin began taping his shows with a cassette recorder ‘in case I ad-libbed something wonderful’. This led to his abandoning a routine in which he drank a couple of glasses of wine, because when listening to the tape later he could hear himself slurring. He never drank alcohol before or during a show again.

He also made another significant change based on reviewing the tapes:

Texas-born and California-raised, I realized I was dropping my “ings” – runnin’, walkin’, and talkin’ – and I worked like Eliza Doolittle to elevate my speech. It was a struggle; at first I thought I sounded pretentious and unnatural. But I did it, though now and then I slip back into my natural way of speakin’.

END_OF_DOCUMENT_TOKEN_TO_BE_REPLACED

A morsel of logic

At Macmillan Dictionary Blog I’ve been writing about etymology and Lewis Carroll.

Etymology bites back traces the connections between the words morsel, remorse, and mordant – all of which carry the sense of biting, to a more or less explicit degree:

[The] common word remorse, as you may now guess, literally means to bite back, from re- added to our Latin friend mordere. We might not be accustomed to thinking of remorse as a metaphor, but in a broad sense it is – like depend it tucks a physical idea into an abstract one. Remorse is the feeling of our conscience gnawing at us. There was also once a verb remord, meaning ‘feel remorse’, ‘afflict with remorse’, etc., but it is archaic and hasn’t been in popular use for centuries.

Language, logic, and Lewis Carroll begins a series of monthly posts celebrating the 150th anniversary of Alice’s Adventures in Wonderland, first published in 1865. It looks at the relative importance of logic in different types of English, and at the uses to which authors may put this variation:

Grammatical agreement is observed much more strictly in standard and formal varieties of English than in casual speech or non-standard dialects. Authors may exploit this to convey certain facts about a character or sociolinguistic context. . . .

Lewis Carroll did this too. In his short story ‘Eligible Apartments’ he uses non-standard dialogue liberally: ‘Here you has them on the premises’ (instead of have), ‘So we grows them ourselves’ (instead of grow), and ‘It do scratch, but not without you pulls its whiskers’ (do instead of does; pulls instead of pull).

Comments are welcome, and older articles can be seen in my Macmillan Dictionary Blog archive

Anyone who has spent some time online, especially in forums or social media where chat and debate predominate, is likely to have come across references to Godwin’s Law, created by Mike Godwin in 1990:

As an online discussion grows longer, the probability of a comparison involving Nazis or Hitler approaches 1.

This builds upon reductio ad Hitlerum (aka argumentum ad Hitlerum or playing the Nazi/Hitler card), an association fallacy proposed by political philosopher Leo Strauss a few decades ago. Godwin says he aimed to:

build a counter-meme designed to make discussion participants see how they are acting as vectors to a particularly silly and offensive meme…and perhaps to curtail the glib Nazi comparisons. (Wired, 1994)

Godwin’s counter-meme spread successfully – so much so, that references to Godwin’s Law are now common enough for me to suggest reductio ad Godwinum as a recursive corollary:

Have you ever invoked Godwin’s Law? And what other corollaries or fallacies might we idly invent? 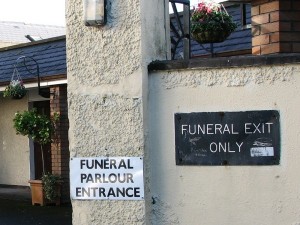 Will this lead to a state of limbo?