When is a typo not a typo? In the wor(l)d of Ulysses

Thus the unfacts, did we possess them, are too imprecisely few to warrant our certitude —James Joyce, Finnegans Wake

As a copy-editor I try to abide by the typographic oath: First, do no harm. When you’re making changes to a writer’s text, whatever you do, don’t introduce an error. But at the risk of undermining that solid principle, there is an occasional exception. 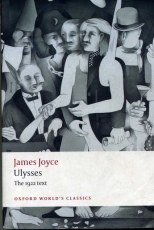 The length and complexity of Ulysses, and the difficulties of its publication, mean that many subtly different versions of the text exist. The first legal edition in the US, which became its standard edition for decades, was based on a pirated copy, for example.

Typographical errors arose inevitably from multiple sources; complicating things further is the fact that some ‘errors’ were deliberate but wrongly ‘corrected’ by printers or editors. And then there were all those rewrites and updates by the author while the thing was being serialised. And afterwards. Brenda Maddox, in Nora, notes that Joyce wrote ‘as much as one third of the final text of Ulysses in the form of corrections or additions in the margins of the proof sheets’.

So there is no ideal, ‘master’ text; in fact Joyce scholars fight over the best way to decide what this even means.

END_OF_DOCUMENT_TOKEN_TO_BE_REPLACED

One of the more entertaining literary spats of recent times was between two biographers of the poet John Betjeman (1906–84). It kicked off in earnest when A.N. Wilson, in a review at The Spectator in 2002, described Bevis Hillier’s biography of Betjeman as a ‘hopeless mishmash’:

Some reviewers would say that it was badly written, but the trouble is, it isn’t really written at all. It is hurled together, without any apparent distinction between what might or might not interest the reader. . . . Bevis Hillier was simply not up to the task which he set himself.

Hillier’s three-volume authorised work had taken him 25 years, and he was none too pleased to see it dismissed so. Years later he described Wilson as ‘despicable’. But harsh words were not enough: Hillier wanted retribution, and he got his chance when Wilson undertook to write his own biography of Betjeman.