END_OF_DOCUMENT_TOKEN_TO_BE_REPLACED

Here’s a new book spine poem (aka bookmash). For the uninitiated: This is a game where you make a visual poem from the spines of books on your shelf.

Wild flowers, the wild places,
The birds of the innocent wood –
The secret place on the black hill,
Half a life still life,
The living mountain
Changing my mind.

END_OF_DOCUMENT_TOKEN_TO_BE_REPLACED

The first time you saw the word biopic, did you pronounce it ‘bi-OPic’, to rhyme with myopic, either aloud or in your head, before learning that it’s ‘bio-pic’, as in biographical picture? If so, you were well and truly mizzled. I mean MY-zelled. No, wait: misled.

There are words we know, or think we know, but: (1) we probably got to know them in print before hearing them spoken, and (2) their spelling is ambiguous or misleading in a way that leads us to ‘hear’ them differently – perhaps incorrectly – in our mind’s ear.

Eventually there’s a lightbulb moment. Oh, it’s a bio-pic, not a bi-opic! I’ve been mis-led, not mizzled! Some linguists and language enthusiasts call these troublesome words misles, back-formed from misled, which is perhaps the prototypical misle. Others call them book words.

END_OF_DOCUMENT_TOKEN_TO_BE_REPLACED

Is ‘corpse whale’ the real etymology of ‘narwhal’?

‘We know more about the rings of Saturn than we know about the narwhal,’ writes Barry Lopez in Arctic Dreams. This ignorance extends to its etymology. Wondering why the animal remains ‘so obscure and uncelebrated’, Lopez believes that the answer lies partly with ‘a regrettable connotation of death in the animal’s name’:

The pallid color of the narwhal’s skin has been likened to that of a drowned human corpse, and it is widely thought that its name came from the Old Norse for “corpse” and “whale,” nár + hvalr. A medieval belief that the narwhal’s flesh was poisonous has been offered in support of this interpretation, as well as the belief that its “horn” was proof at that time against being poisoned.

This is certainly the prevailing etymology. Look up narwhal in most major dictionaries that offer one – American Heritage, Oxford, Merriam-Webster, the Online Etymology Dictionary – and you’ll see the ‘corpse whale’ derivation presented more or less definitively, with a ‘probably’ or two included as insurance.

END_OF_DOCUMENT_TOKEN_TO_BE_REPLACED

A mystery letter among the leaves

Walking clears my head. Especially here, on the eastern lip of the Atlantic, the fresh winds gusting in over Galway Bay clear the cobwebs of editing and writing from my mind. When I need a break from work – from books, paragraphs, sentences, words, letters – I walk.

Sometimes, though, the letters follow me. This one gave me a proper surprise, almost glowing in the wet autumn ground: 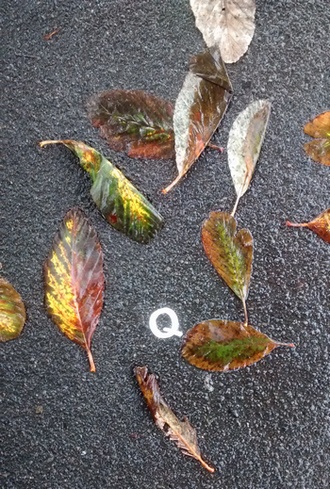