END_OF_DOCUMENT_TOKEN_TO_BE_REPLACED

I have three new posts to report from Macmillan Dictionary Blog, where I write a monthly column about words and language. Links and excerpts follow.

‘This is highly irregular’ showcases the devilish irregularity of English:

English is a famously irregular language, its grammar laden with exceptions to the rules. This is largely a result of English being a mosaic of different languages. To its originally Germanic structure were added heavy layers of vocabulary from Latin, French, and elsewhere, over centuries of use. This prolonged and complex mixing of influences led to the lack of uniformity we find in English verb patterns today.

Past tense and past participle verb forms are the focus of the post, which includes a brief quiz: Can you solve these, for example? 1. Once again the dog had [lay] its head on her lap. 2. He remembered he had [drink] the cocktail before. The point being, even native English-speakers struggle with some of these verbs.

Ask people to put elementary in a sentence, and many will quote a famous catchphrase by Sherlock Holmes, the great detective created by Arthur Conan Doyle: ‘Elementary, my dear Watson’ (sometimes without the possessive determiner: ‘Elementary, dear Watson’). The expression, generally used humorously, has taken on a life of its own, with a separate entry in Macmillan Dictionary that says it means something is ‘very easy to understand or solve’. But all is not as it seems.

It turns out that in Conan Doyle’s 56 short stories and four novels starring Holmes, the detective never once says the line, with or without the ‘my’. I dig into the etymology.

‘Don’t belittle this word’: Sometimes a word is hated with a passion, by many people, for many years, and then new generations arrive and think nothing of it:

If you were told that a word had ‘no chance of becoming English’ and should be ‘abandoned to the incurably vulgar’, you would not guess that the word is belittle. It seems so ordinary and uncontroversial nowadays. But those quotes, from Fitzedward Hall in 1872, reflect real historical antagonism to it. ‘For shame, Mr. Jefferson!’ spluttered an article in the London Review, criticizing the Founding Father for coining it.

With all the anxious commentary now reduced to a quaint historical footnote, I review the word’s history and the gradual but ultimately radical shift in people’s attitudes to it. 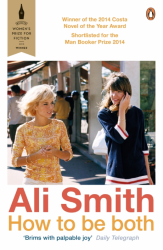 END_OF_DOCUMENT_TOKEN_TO_BE_REPLACED

English is not pure or in peril

On Twitter yesterday, Bryan Garner shared a quote by Arthur Schlesinger on language usage that I hadn’t come across before; it seems to be from Schlesinger’s 1974 essay ‘Politics and the American Language’:

The purity of language is under unrelenting attack from every side – from professors as well as from politicians … and not least from those indulgent compilers of modern dictionaries who propound the suicidal thesis that all usages are equal and all are correct.

There’s a lot going on there, so I’ll break it down a bit. The elided material after ‘politicians’, by the way, clunkily extends the list of attackers to include newspapermen, advertising men, men of the cloth, and men of the sword.

While we can blame men for many things, this ain’t one of them. Politically Schlesinger may have leant liberal, but linguistically he was reactionary, if that line is any indication. Its points are ignorant and extremist (‘attack’, ‘suicidal’? Come on), and laden with false premises and invidious doom-mongering.

As the Pet Shop Boys sang, I’ve got a different point of view:

To elaborate: If English were not so gloriously impure, so amenable to borrowing willy-nilly from other tongues from the year dot, we may not be speaking it today. If it survived at all, its reach – geographically and expressively – would be more provincial.

This capacity to absorb bits of other languages is a feature, not a bug. Anyone banging on about a language’s ‘purity’, unless it’s a computer language, or a constructed language that has never been used in conversation, needs a history lesson, stat.

END_OF_DOCUMENT_TOKEN_TO_BE_REPLACED

A to Z of English usage myths

English usage lore is full of myths and hobgoblins. Some have the status of zombie rules, heeded by millions despite being bogus and illegitimate since forever (split infinitives, preposition-stranding). Other myths attach to particular words and make people unsure how to use them ‘properly’ (decimate, hopefully), leading in some cases to what linguists call ‘nervous cluelessness’ about language use.

These myths spread and survive for various reasons. On one side is the appeal of superiority. On the other is fear of embarrassment: We play it safe rather than risk ridicule and ‘correction’. We are (often to our detriment) a rule-loving species, uncomfortable with uncertainty and variation unless we resolve not to be. We defer to authority but are poor judges of what constitutes good varieties of it.*

So if a self-appointed expert on English asserts a rule, some will lap it up no matter its validity. The unedifying results are laid bare in reference works like the Merriam-Webster Dictionary of English Usage (MWDEU), which, with rigour and wit, summarises centuries of confusion and argument over whether A or B is correct when often both are or each is appropriate in a different variety of English. 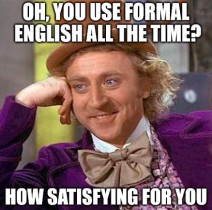 Huge effort is wasted on such trivialities. So, as a quick exercise in myth-busting (and amusing myself), I posted an A to Z of English usage myths on Twitter last week. Reactions were mostly positive, but some items inevitably proved contentious, as we’ll see.

You can click through on this initial tweet for the full A–Z plus supplements on Twitter, or you can read the lightly edited version below, followed by extra notes and quotes now that the 140-character limit doesn’t apply.

A to Z of English usage myths.

It'll be a busy hour. Mute the conversation or #usagemyths if you want out. Thread ↓

END_OF_DOCUMENT_TOKEN_TO_BE_REPLACED

I have two new posts up at Macmillan Dictionary Blog, both in a historical vein. First up, Blethering about blatherskite explores a colourful term for nonsense (or for someone talking nonsense):

Blatherskite is a compound in two parts. It was formed by joining blather – a noun and verb referring to long-winded, empty talk – with skite, a Scottish insult with ancestry in an Old Norse word for excrement (skite is related to shit).

Macmillan Dictionary labels blatherskite as American and informal. There’s no surprise about the second label: the word doesn’t appear often in print, occurring more in vernacular use. But since blatherskite originates in Scots, it’s curious that it should have become a chiefly American word.

The post goes on to explain how it crossed the Atlantic and discusses its phonetic suitability.

As You Dislike It considers the word very as an intensifier – a usage that prompted some protest when it first began to spread:

Very was originally used to indicate that something was true or real, as in the phrase ‘he was a veri prophett’ in William Tyndale’s Bible of 1526. This meaning, though less fashionable now, is still used, and its semantic root is apparent in words like verity, veracity, and verify. Only later did people start using the word as an intensifier.

This emerging, emphatic use of very became extremely common in the sixteenth century. Shakespeare not only uses the word this way, but in Romeo and Juliet (2.4.28–32) he draws attention to conservative attitudes towards this change . . .

If you’re thinking of the parallel with literally – in both semantic development and conservative backlash – you wouldn’t be alone. I look at these and other aspects in the rest of the post.

Older articles can be read at my archive at Macmillan Dictionary Blog.