[Note: This limerick contest is now over. See foot of post for updates.]

It’s competition time at Sentence first! All you have to do is write a limerick about language and add it in a comment to this post, and you’ll be in the running for a Kindle or some fine books on language. First, a word about our sponsors.

Sponsoring the contest and supplying the prizes are the good people at Stack Exchange, a community-based Q&A website. At SE, people ask questions, answers are discussed, edited, and voted on, and so the most helpful rise to the top. There are sections on cooking, maths, photography, programming – all sorts of special interests, including:

Click the pic to visit. The English Language and Usage page has a lively turnover of questions on usage, etymology, semantics, pronunciation, dialects, phrases, and other such topics; the FAQ offers a useful introduction. It’s a friendly, informative kind of place. Some example discussions:

Why is q followed by a u?
Why are there inconsistencies in the pronunciation of the alphabet?
What is the origin of ZOMG?
Can doubt sometimes mean question?
Did English ever have a formal version of you?
Origins of the word bug in Software.
Proverb or expression for a situation with two choices, both leading to a different kind of trouble.

Here’s one relevant to our competition:

What is it about English that makes it favourable for writing limericks?

And one that caught my eye from the Science Fiction & Fantasy page:

How does Superman shave?

I think it’s an addictive place to browse partly because whatever one person is curious about, others will be curious about. Try it and see.

And so to business. Lauren, who manages the English Language & Usage page, recently got in touch to propose a contest; I suggested limericks, and now it’s your turn.

Limericks should be of normal length, rhythm, and rhyming scheme, more or less. You probably know the structure well. Wikipedia has the basics, and I’m glad to see it cites Gershon Legman, whose thorough and spectacularly rude two-volume collection I read this year. But do please resist this tradition – keep your compositions family friendly, and ignore Morris Bishop’s characterisation:

The limerick is furtive and mean;
You must keep her in close quarantine,
Or she sneaks to the slums
And promptly becomes
Disorderly, drunk and obscene.

Should your muse linger, you can submit 2–3 limericks – but no more! They should be original, and in English. The theme is language: writing, grammar, usage, style, and so on. Anything language-y or linguistic, so long as it entertains. Rhymes should be close but need not be precise. Inventiveness is encouraged; repeating a rhyme (à la Lear) is not. 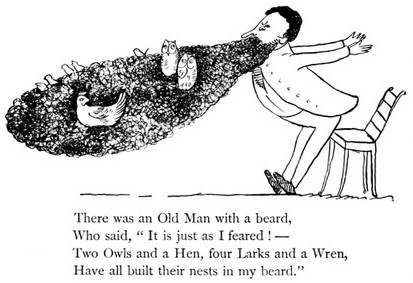 First prize is a Kindle, Amazon’s popular e-book reader. I hear they’re all the rage.

Second prize (B) is two older books I have read, and to which I often refer: T. P. Dolan’s wonderful A Dictionary of Hiberno-English, described by Tom Paulin as “a pioneering work of scholarship”; and the great Merriam-Webster Dictionary of English Usage, which Geoffrey K. Pullum calls “the finest work of scholarship on English grammar and usage I have ever seen.”

Prizes can only be sent to western Europe, continental U.S., and Canada. I’m sorry if that’s a problem for some readers. You can’t enter if you’re related to me or work for Stack Exchange; otherwise, go for it. It’s impossible to be objective about poetry, so if I can’t choose clear winners I’ll narrow it down a bit and pick three at random.

You don’t have to spread the word through social media – or traditional speech or gesture – but I’d love if you did: the more entries, the more fun for all.

Today is Monday 12 September; the deadline is Friday 23 September. Winners to be announced the week after, in an update to this post. In the meantime, you can find me on Twitter, if you’re the tweeting type.

Thanks for reading, and good luck!

Update 1: The contest is now closed. Thank you all very much for submitting poems and spreading the word. I’ve had great fun reading the limericks (over 130 of them!), marvelling at their wit and ingenuity.

I’ll make a shortlist of the ones I’m most impressed by and will draw lots for the prizes. Winners will be announced next week. Comments are closed until then.

Some of you will be interested to know that Stack Exchange now has a Linguistics page.

Update 2: So many good limericks were entered, I wish I had more prizes to give. Ten times more. But I’m happy to announce the following three winners:

If engaged in a contest with Inuit
in snow-naming, please, discontinue it!
We can hardly compete
Using “slush”, “powder”, “sleet”…
You’ve got to be Inuit to win you it!

for imaginative rhyming and inspired silliness. (Alongside his limerick I must recommend this essay (PDF) on Eskimo words for snow.)

More sense in 25 words than you can shake a derivational suffix at. (Note: after the verb contact (in the sense get in touch with) arose in the early 20th century, it was “greeted with open hostility by purists for several decades”, according to Robert Burchfield.)

There was once a pig’s ear of a language,
Romance scraps in a Jerry-built sandwich.
Mostly used for rude jokes,
It became for some folks
Something nothing was seriouser than which.

for fine philological punning and wonderful syntactical funning that made me laugh much longer than I ought to admit.

Congratulations to Mike, Lisa, and Paraic, thanks to Stack Exchange for their generosity, and thank you all again for taking part!