END_OF_DOCUMENT_TOKEN_TO_BE_REPLACED

Winter sunset and a seasonal note

A scene from Salthill, Galway, a few weeks ago. It was a bitterly cold evening but the Prom was full of people, many of them like me unable to take their eyes off the changing sky and its play of light on the bay. 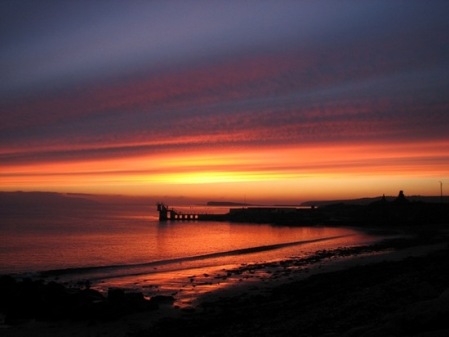 To regular readers and occasional passers-by: Happy Christmas and a peaceful new year, and thanks for your visits and comments during 2012 – there’d be no Sentence first without them. See you in a couple of weeks, or sooner if you’re on Twitter and I pop in over the break.

P.S. Feel free to use the comment form to pose queries, suggest ideas for future posts, tell me what you’re reading, and so on.

Walked and kept walking
till I saw turnstones
feeding in soft
sunlight falling
on an empty shore.
So I waited there.

[This was originally a tweet in the heel of winter; it wasn’t meant to become a lazy poem. To make it up to you, there are more birds here.]