In a recent post I noted an Irish sense of the word gentle meaning ‘enchanted or visited by fairies’, used in Charles McGlinchey’s book The Last of the Name. That book also features the unusual word spey:

I think it would be a descendant of these Dohertys of Keenagh who was a great harp player, the best in Ireland. One Christmas market he was going to the fair of Carn, but his stepmother, who could spey [foresee] and read the planets, advised him not to go for there was blood over his head. When he insisted on going, she killed a rooster and sprinkled the blood over him.

On his way to Carn, a fight broke out between Catholics and Protestants; Doherty stabbed a man and had to leave the country. His stepmother’s spey proved accurate. Though glossed in the original as ‘foresee’, the verb spey is closer to ‘foretell’: more clairvoyance than prediction.

Also spelled spae (which is how most dictionaries list it, if they do), or spay, the word entered English from Old Norse spá around the 14th century and throughout its history has been in mainly Scottish use. I’m not sure of the connection, if there is one, to spy, which comes from the Indo-European root spek- ‘observe’.

Ye little skelpie limmer’s face!
How daur you try sic sportin’,
As seek the foul Thief ony place,
For him to spae your fortune!

The verb gave rise to a noun, spae ‘prediction, prophecy, omen’, which is in much rarer use. The OED cites Sabine Baring-Gould’s Iceland: its scenes and sagas (1863): ‘The Finns’ spae is come true, so here we shall settle.’

END_OF_DOCUMENT_TOKEN_TO_BE_REPLACED

I’ll assume readers know that the ‘Eskimos have X words for snow’ idea is essentially a myth and a hackneyed journalistic trope. So I won’t elaborate on it here, except to note that the claim is so notorious in linguistic circles that it gave rise to snowclone, a handy term for this kind of clichéd phrasal template.

It turns out, though, that there are quite a few words for snow (and, OK, ice) in Scotland.* Ian Preston sent me a recent photo he took of an art installation in the lobby of the Cairngorm Funicular Railway, republished here with his permission:

END_OF_DOCUMENT_TOKEN_TO_BE_REPLACED

Here’s a word I don’t recall noticing before: sneck. I came across it in John Gordon’s short story ‘Left in the Dark’, in a Ghost Stories anthology chosen by Robert Westall:

…the stairway became narrower until there was scarcely enough room for them and their luggage, and their free hands were holding a painted rail. They came to a landing of bare boards and one small window.

‘Can’t be any farther, can it?’ said Jack. ‘We must be practically under the roof with the birdies.’

‘That’s where you’re wrong, hinny.’ Pauline imitated his Newcastle accent. ‘There’s one more stage yet.” She went to a plain door that had a latch instead of a handle. ‘Lift the sneck,’ she said as she raised the latch and pulled back the door, ‘and here we are. Almost.’

Sneck is a dialect word from Scotland, also used in the north of England, referring to the latch or lever of a gate, door, window, etc. (see photo, below).* It’s also a verb: to sneck the door is to close or fasten its latch; or you could ‘put the door on the sneck’. A door that’s ‘off the sneck’ has the catch left off; if it’s sneckless, there’s no latch.

Sneck was around in Middle English as snekke. The OED says it’s obscurely related to snatch (n.); Skeat’s Etymological Dictionary makes the same connection. The Dictionary of the Scots Language has a wealth of dialectal examples from the last few centuries.

The word has produced several phrases. A sneck drawer or sneckdraw is a ‘latch lifter’, meaning a sly, crafty or stealthy person, or even a cheat. Similarly, to draw or lift a sneck can mean to act in a sneaky, surreptitious fashion, or to insinuate oneself thus into a situation.

A sneck-lifter can be a burglar, a ghost, or someone who goes door to door in the traditional ‘First Footing‘ ritual on Hogmanay. Most elaborately: according to Jennings Brewery, who make Sneck Lifter Ale, the phrase can mean

a man’s last sixpence which enabled him to lift the latch of a pub door and buy himself a pint, hoping to meet friends there who might treat him to one or two more.

A sneck-bend is a hook-shaped bend you’d find in a river or road, while a sneck-band is a latchstring, a piece of string tied to a sneck/latch and passed through a hole to the outside of the door or gate. A sneck-posset is a fastened latch, and give a sneck posset is an idiom equivalent to ‘give someone the cold shoulder’ (i.e., give an unfriendly reception).

Sneck up is an imperative meaning ‘be silent’ or ‘shut up’. Jonathon Green, in Chambers Slang Dictionary, dates Sneck up! (also Snick up!) to the late 16C–mid-17C, and describes it as an exclamation of dismissal, as in ‘The hell with you!’, taking its literal meaning as draw the latch and go to the other side of the door.

In a helpful article about the word for Caledonian Mercury, Betty Kirkpatrick says it even appears in head gear: a snecker-doun is ‘a man’s cloth cap, known in Scots as a bunnet, with a stud fastener on the peak’. Lifting this sneck has opened up a charming store of phrases previously unknown to me, both literal and metaphorical.

Edit: An example from Texas, 1909: ‘…and the Lord said unto Moses — “Sneck that door!”‘ via @TweetsofOld, who also found sneck off used as a typesetting term in Minnesota, 1899. 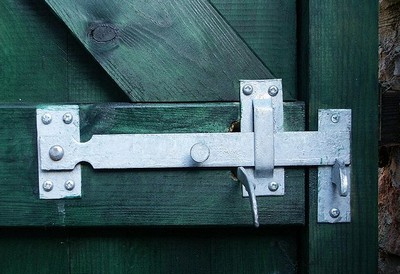 * Sneck can also refer to a cut, a nose, or a type of small stone used to fill gaps in a wall, but I’m ignoring these senses here.