It’s almost a year since my last book spine poem. Here’s a new one.

Return from the Stars

Return from the Stars,
A portable cosmos –
Island home buried in
The sky, the island of ghosts,
The uninhabitable Earth,
Kindred love, again,
Touching from a distance
Homesick,
The stars my destination. 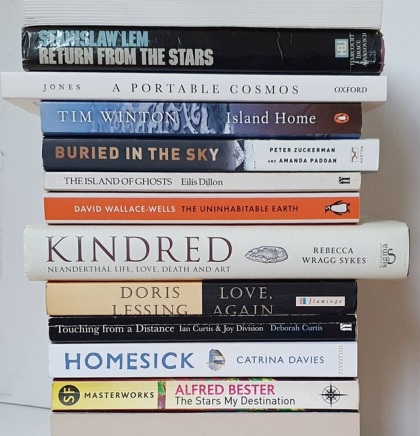 END_OF_DOCUMENT_TOKEN_TO_BE_REPLACED

It’s a few months since I made one of these. So: a new book spine poem. 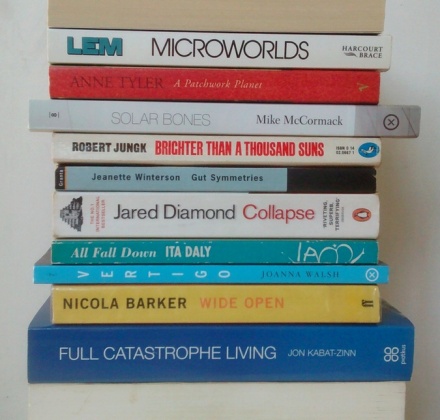 END_OF_DOCUMENT_TOKEN_TO_BE_REPLACED

The celestial aspirate of Mister Lem

Stanisław Lem, in The Star Diaries, has an amusing inversion of our custom on Earth of adding more and more letters and titles to our names as we gain academic and other distinctions.

From “The Thirteenth Voyage”:

My object, when I set out from Earth, was to reach an extremely remote planet of the Crab constellation, Fatamiasma, known throughout space as the birthplace of one of the most distinguished individuals in our Universe, Master Oh. This is not the real name of that illustrious sage, but they refer to him thus, for it is impossible otherwise to render his true appellation in any earthly language. Children born on Fatamiasma receive an enormous number of titles and distinctions as well as a name that is, by our standards, inordinately long.

The day Master Oh came into the world he was called Hridipidagnittusuoayomojorfnagrolliskipwikabeccopyxlbepurz. And duly dubbed Golden Buttress of Being, Doctor of Quintessential Benignity, Most Possibilistive Universatilitude, etc., etc. From year to year, as he studied and matured, the titles and syllables of his name were one by one removed, and since he gave evidence of uncommon abilities, by the thirty-third year of his life he was relieved of his last distinction, and two years later carried no title whatever, while his name was designated in the Fatamiasman alphabet by a single and – moreover – voiceless letter, signifying “celestial aspirate” – this is a kind of stifled gasp which one gives from a surfeit of awe and rapture.

Lem’s literature is as much philosophical excursion as it is storytelling (with plenty of playful asides, as above). He has a gift for both, and a wicked sense of humour – some chapters in The Star Diaries are like Borges having a Douglas Adams dream, as I remarked at the time.

He’s probably best known for Solaris, but it’s not one of the handful I’ve read so far, all of them brilliantly entertaining and consistently thought-provoking. It seems appropriate that Mister Lem’s own name is so short: not quite Master Oh’s stifled gasp of awe and rapture, but not a million light-years away either.

Edit: Speaking of aspiration and verbal invention, Passive-Aggressive Notes has a note this week from a 6-year-old girl to her mother with what appears to be a sigh of frustration: “hhhh”. I don’t think I’ve seen a sigh spelled so perfectly before.