Every so often I make a poem by stacking books on top of one another so their titles line up felicitously. I call them book spine poems, or bookmashes for short. Here’s a new one.

Voices in stone
breaking the rock:
the accidental grammar,
the loom of language,
the awakening of intelligence,
the mind’s eye reborn –
Renegade presence,
gifts of unknown things.

Some of these are recent additions to the bookshelf; a few are old favourites. There’s a strong bias towards non-fiction here, with Ali Smith’s the only novel. In 2013 I found a close ratio of fiction to non-fiction in my bookmashes, but I’ll have to review the figures, maybe when I’ve done 40 or 50 (we’re at 37 now).

END_OF_DOCUMENT_TOKEN_TO_BE_REPLACED

Since I have neologisms on the brain, I got to thinking of one coined by Robert Anton Wilson (in his book The New Inquisition, as far as I know): sombunall, meaning “some but not all”. Wilson intended it as “semantic hygiene”, a neo-Whorfian corrective to dangerous generalisation, or a sort of epistemological buffer.

The word hasn’t caught on widely. Google hits aren’t much of a metric, but sombunall’s count of <7.5k (when last I looked) shows its relative obscurity; on the OneLook dictionary aggregator only Urban Dictionary features it (nothing in the unabridged OED or Merriam-Webster). Maybe because some but not all isn’t so unwieldy in the first place, and plain old some does solid work albeit without explicitly emphasising the not-all bit.

I included sombunall in an early language-links post, but never adopted it habitually myself. Because of its limited use, the word remains strongly associated with Wilson, as do its relative mosbunall (“most but not all”) and the Discordian in-joke fnord, among others. This RAW fan site, for instance, is subtitled “Sombunall things Robert Anton Wilson”.

Reading Susan Sontag’s Against Interpretation, I came across one occasion when it would have been very convenient to have sombunall available in general circulation. From the short essay on Simone Weil:

With his commitment to systematic uncertainty, or perhaps more accurately anti-certainty, Robert Anton Wilson would, I think, have enjoyed those lines. I have sombunall faith in this assumption, of course.

Bookmash 16: Virtual light in the heart of the sea

Virtual light in the heart of the sea

Virtual light
In the heart of the sea
The waves breaking
The spell, the crossing
The ever-present origin
Atomised, reborn. 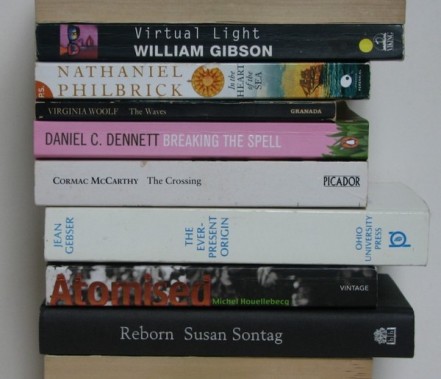 More of these, and links to other people’s, in the bookmash archive. Feel free to join in.

Chelsea at Parole Passport has just posted ‘The Silent World’, her first bookmash.

Julienne, who blogs at nephithyrion, has created two lovely examples.

A new bookmash today. Most of my books are in storage, or I would be doing these more often, but there are enough within arm’s reach to put the occasional one together without reusing too many titles.  p.

Ambient gestures
Against interpretation,
The sense of things
Out of the ordinary:
Unspeak the tyranny of words.

You can see previous examples in the bookmash archives, including links to other people’s. Let me know if you join in, and I’ll add you to the list.

Thanks to Nina Katchadourian for the idea, and to the featured authors (dead or alive): Jack Womack, Desmond Morris, Susan Sontag, Alison Dye, Jon Ronson, Steven Poole, and Stuart Chase.

[I posted this bookmash on Tumblr as well.]